What does Hip Hop mean?

As it comes to the term of “Hip Hop” you can find two theories always popping up :

But what does it stand for now?

I think one MC who did the best explanation of this term is KRS ONE in his song “Hip Hop lives” :

“Hip means to know, it‘s a form of intelligence. To be hip is to be update and relevant. Hop is a form of movement, you can‘t just observe a hop, you gotta hop up and do it. Hip and hop is more than music. Hip is the knowledge, hop is the Movement. Hip and Hop is intelligent movement.”

Hip Hop lives under the philosophy of “Afrika Bambaataa” :

Peace, Love, Unity and having fun.

Let‘s go to the beginning of this urban culture. It all began on August 13th, 1973 at 1520 Sedgwick Avenue, Bronx, New York. Cindy Campbell, referred as the First lady of Hip Hop, wanted to throw a party for her birth- day and to earn some money. Since her brother, DJ Kool Herc (Clive Campbell), was a young DJ everything fitted perfectly. The first party “Back to school jam” is the birthplace of Hip Hop where the 4 elements came together for the first time :

Knowledge is considered as the 5th element today. As some Hip Hop heads are not doing one of those art-forms but still sharing the history or are involved in another way, we could consider they are part of the 5th element and share the knowledge.

It is pretty simple. A lot of DJ‘s knew how to rap, MC‘s knew how to break, B-boys/B-girls knew how to graff and so on. The party closed the circle and regrouped these different art forms and they became the main ele- ments of Hip Hop. Since it all started in the ghettos, these elements were also the most significant ones, because they allowed the people to speak up and helped them to get rid of their fears and frustrations.

Some will say there is also the 5th element, which they say is “Knowledge & Consciousness”. 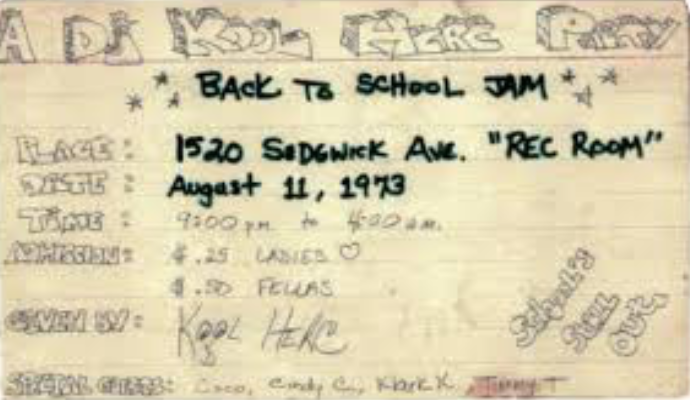 Flyer of the first block party