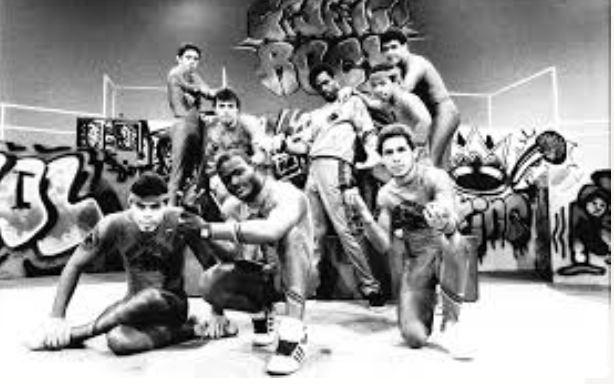 I will start it simple by explaining the name, as I did above. The term b-boy/b-girl comes from the breaks of the records DJ Kool Herc was playing and the people were dancing on. “These guys are dancing on the breaks so let‘s call them B-boys, Break-boys”. The term “breakdance” only appeared later through the medias because they saw them dancing in the streets and said they are dancing but what they do looks dangerous, they might break something. B-boys never liked that term because it came from outside of the culture, especially because it came from the medias, who had also a negative impact on the scene..

The first steps they did on the breaks were the moves of James Brown‘s track “get on the good foot”, so at the beginning, b-boying was stric- tly dancing on their feet, toprocking, but two dancers started chan- ging that by starting to do steps on the floor and spinning around. The first real footwork basics were “sweeps”, “CC” and “the Russian”. These footworks never looked complete at the beginning because they al- ways stopped to get into the next move or got back up to do toprocks/ uprocks again.

As the parties moved to the parks, b-boys have been seen a lot more and a lot of people started b-boying too. This was the beginning of the rise. After this the hispanics joined the movement with their crazy moves, like the backspin or the continuous backspin (windmill). Spy was considered as “the man with the thousand moves” and creator of the “swipe”.

The basic forms in b-boying / b-girling :

3. Footwork – steps on the floor

5. Powermoves – all the dynamic spinning moves

The two crews you need to know are Rocksteady Crew and New York City Breakers (changed their name from Floormasters). These two crews had the biggest impact at the beginning of the b-boy scene.

Rocksteady crew was formed by Jimmy D and Jojo, later on they passed it to Crazy Legs (creator of the windmill). This crew had the most succes of them all, they did the first organized battle against Dynamic Rockers and were the first b-boys to appear in a Hollywood movie and been seen worldwide on the big screen in the movie called “Flashdance”. This was another reason for a big boom in b-boying. As in New York was focused on style in LA they focused on the powermoves.

The New york city breakers were the crew which commercialized b-boying, they did a show for the US president Ronald Reagan, danced on the TV show Soultrain and did tons of other shows. The dance scene blamed the manager of the crew of being the reason of the disapearing scene, as he was the one commercialising it.

In 1986, the media turned its back on the b-boys and started complaining about the risk of injuries they ran, so the police started closing streets and parks where b-boys have been practicing. Since b-boying was a way to stay away of the gangs and get rid of the daily frustrations of the ghettolife it was a huge change in the life of the b-boys. The b-boying scene almost died out and a lot of b-boys joined gangs and the drug scene and have been killed. It got to the point that one b-boy of Rocksteady Crew has been murdered in such a hard way that even the medias picked it up and Bambaataa held another meeting. The gangster rap era had a negative impact on the b-boy scene too since the police was feeling threatened by the hip hop culture.

The b-boys have also almost been forgotten by their own culture until Krs One stepped in and took the b-boys back on stage with him during his concerts and as they were talking about a rap video he was the one showing the industry the b-boys again. The rise of the b-boys was guaranteed again. Competitions like Radiotron battles or Battle of the year have started to get huge. This still wasn‘t calming the police down who appeared on the B-Boy summit event at Venice beach to shut it down and arrest a lot of them. Even I had my troubles with the Police when I was still dancing in the streets, so it wasn‘t only in the states.

Luckily b-boying kept fighting till today and got stronger than ever. Now you can see moves of b-boying in a lot of other dance styles, gymnastics, musicals and they even planned to do a b-boy category at the Olympics. They took this raw artform which was most of time seen in circles or battles onto the biggest stages and became today storytellers.